Facebook has rolled out a new Live video feature. The company has brought the ‘Screen Sharing’ feature in Live videos, a task that until now required third-party applications.

This new feature, as one can gauge, lets viewers see the video creator’s screen. This could be helpful for those giving online tutorials. Spotted first by The Next Web, the Facebook Live screen sharing feature will require users to download and install a Facebook extension on the browser. The report said that the extension worked with Google Chrome but was not available in Firefox.

According to 9to5Mac, the feature is not yet present in Safari. 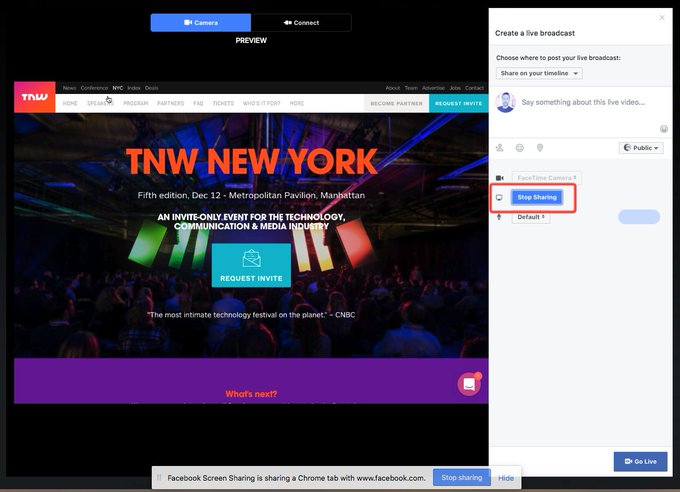 Once installed, users will get the option to share by windows/application. They can also stream specific tabs from the browser. This step removes the middleman (third-party) website from the live streaming process and is likely to make it more accessible.

On a related note, Facebook is testing a dedicated WhatsApp button button in its platform. According to a report, the button will function as a shortcut and a click on it will open user’s WhatsApp without leaving the Facebook app. In the screenshot shared by the TheNextWeb, the button is placed in the menu area of the app.

The report claims that users found the WhatsApp shortcut button when they switched the language settings in the Facebook app.

This is not the first time that the company is testing this kind of a feature. In 2015, Facebook tried incorporating a WhatsApp send button in the Facebook app, which would enable the users to share photos with their contacts without leaving the app. But, the feature was never rolled out for public.

WhatsApp too has rolled out its ‘Live Location’ sharing feature for Android and iOS users.

This site uses Akismet to reduce spam. Learn how your comment data is processed.

Samsung SmartThings is the latest ecosystem to join the Matter protocol